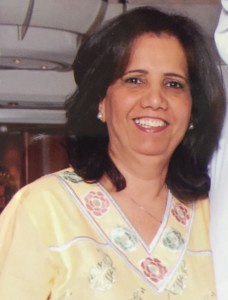 My friend died after spending four months in a coma lying on a bed in the ICU unit in Bahrain. She and her husband were our dear friends and we frequently met and had dinners, lunches and coffees. Our kids also met each other many times. Both my friend and her husband were my study mates when I went to do my bachelor degree in Iraq. Maani was the most affectionate of all the girls and she looked after us the new group, took us shopping and showed us the way around town. It was usual for the sophomores to help the freshmen and be their mentors but this particular woman went out of her way. Then it just so happen that I started my first job in the same place she worked in. Our frequent meetings had changed into a great friendship that I will cherish forever.

I can tell that the husband, Salman, is very upset but was trying to hide his grief and act normally. But I am sure that he is not feeling Normal. The loss of his soulmate is not something that happens everyday in our life and it’s not something that one would brush off as a routine. They were inseparable and were travel companions as they took their annual trips to other countries and to cruises. I am sure Maani had had a great life which was cut short by the bezzar illness that eventually took her life. Her life was meaningful and with the number of people I have seen at her condolence I can tell that she was mangling with the rich, the poor and the regular. She had people from all types of religions and all sects of society. And even though the hall where the condolence took place in was small but I felt it was getting bigger and bigger to absorb the number of people coming in exactly like her heart. She was truly a gem that we should hold on to in our hearts forever.

My trip to Bahrain to attend the condolences was timely. I met so many of my college mates whom I haven’t seen for almost four decades. I couldn’t believe how everybody had changed in the way they looked but the inside was the same. They were all refined individuals that I met fourth years ago with the soft hearts and great personalities. I really thank Maani for making that happen. Now I must make it a point to see my friends from college more often same as what Maani had done with me as she used to initiate the gatherings and pull me out of my day to day routines.

My condolences to Salman, Rawan, Tamim and Bassam. And my condolences to the sisters Fathiya, Najat, Nuhad and the others. Wish you all the patience to absorb her death and to pray for her to be happy wherever she is. I am certainly going to miss her a lot.