Misunderstandings between men and women has no cultural boundries

It always fascinates me when I read stories, watch movies, talk to friends and family about relationships (I am going to say this once and for all, and will not talk about myself, as I feel that my condition is unsolvable), the similarities of the problems that occur between a husband and wife, fiances, boy friends/girlfriends, and whatever relationships that maybe on earth is amazing, and there is no reason to link the differences to culture, nationality, age, education, religion, gender, and any of those acronyms that we have to reply to when filling forms.

I am not a psychologist, and of course I cannot be the one to be blamed for solving this eternal problem, without this problem life has no spice I guess. So let me start.

Few months ago, I had a gathering of two Emirati girls, two Iraqi girls, one Turkish and I (a Bahraini who lived everywhere and has no nationality) and not sure if you guys know what happens when a lot of women are sitting in one room, we all talk, eat, drink, and fiddle with our handbags and at the same time listen, be emphatic, nod, send BBMs and WhatApps, and wear a new quote of lipstick (stereotyping? yes); anyway, I was saying that we were discussing lots of stuff, and as usual men were mentioned, suddenly the mood of the room had changed, doom and gloom captured us all, it was as if we were in one of those animated pictures when suddenly you see a black cloud on top of your head, you are struck with thunder, and completely soaked with heavy rain. The Turkish girl was chatting away about the row she had with her husband about the car, the two Iraqi girls said that they hate their husbands as they always chase girls and at the same time tell them that they are infidel, the Emirati girl cried saying that her husband almost chocked her to death as he was drunk and had a relationship with a whore and when she confronted him he got so excited and almost killed her. I for a change tried to calm the situation as it was soon to be exploded.

Then a few weeks ago, I had a group of friends also multinational, we talked about the kids, education, fashion, politics and the recent Arab spring, we tried to analyze the reasons for it, and whether it was a conspiracy theory from the famous United States or a real thing? then we ate, and ate more, and talked more about being fat and not able to exercise due to lack of time (the fact that we had wasted few hours eating did not count); then we went for a swim, came back and had more food, and talked even more about our lives and how it is wasted as we do not seem to have healthy relationships. Almost all of us were complaining about the lack of understanding, patience, help, love, affection, da da daa of our second half.

I have spent this weekend with a friend who after talking for a while she started to cry as her husband left her and traveled despite her being ill, and never talked to her to find out if she was fine or not. And after few weeks of complete silence, he told her that she was to blame as she was depressed about her illness????? excuse me dumbo, women can get ill as well, illness is not something that is only given to men as a gift from God! anyway, this friend is also from a different nationality and culture.

Not sure if I proved my point, that despite all of us having various backgrounds, we are all faced with the same problem, not very understanding men! of course the men are also from different backgrounds. This brings me to the conclusion that all the problems that the world is having right now is not because we are sunni/shia, not because we are white/black, not because we are western/eastern, not because we are gay or straight, it is because when men and women are brought up (in every community) they are not told that people have feelings, don’t be hasty, think before you utter a stupid word, look at the person’s eyes and say what you feel straight away, say what you think of the person in front of you without fear that he or she is going to hit you with a brick, discuss straight away instead of sulking for a long time and letting the volcano to erupt and ruin the world.

No wonder that the world is having problems since creation, we never learn and almost always history repeats itself. The picture below shows us, human beings, that we are exactly like these swans and ducks, though they are of different feathers and looks, they flock together. 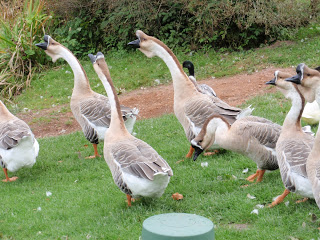