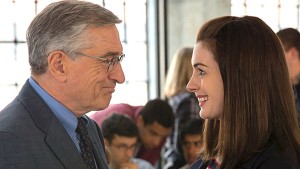 Sorry I am not writing about family matters, students matters or any of the stuff that I do on a daily basis, this time I am talking about a movie that had really inspired me.  I just watched it today and it was funny, hilarious, teasing, inspiring, teaches you a thing or two about the huge river that can separate the old and the new and how we can build bridges to link us all in this mesh called the world.

It was not an ordinary movie, although Ann Hathaway talks in the same way and dresses in the same lovely way, and Robert De Niro is his tamed self, however the combination of the two linked with an idea that is totally new, plus the problem that all women entrepreneurs have when they start a business (a condescending husband and nasty venture capitalists if and only if she can find them of course! as VCs do not easily give in and part with their money to ideas of women) to the extent that reality had forced the woman to search for a CEO to run her own business instead of everyone helping her with it.  Strange how life had saved her by sending a person from the old school who weirdly enough was working in the same building for 40 years making phone books until technology wiped them out.  The way that the old can help the new is phenomenal as we never think of it this way.  I for one always thing that the new should replace the old, but the movie proved me otherwise.

Here is the trailer  if you would like to see it is still on in most cinemas in Dubai.  I would love it if people can give me their opinion too.  I had a mixed feeling after watching it and thought maybe I should move to America, maybe the VC’s there are better than what we have here, and maybe my idea that started 13 years ago can get a bit of attention and it could grew so every student can benefit from it.