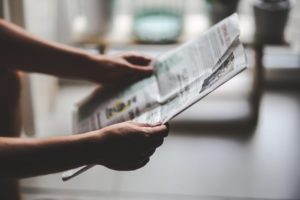 If you are wondering, a printing business can be magazines, newspapers, books, pamphlets, brochures, fliers, any other thing that is done on paper.  At last the Green people every where has become very successful in convincing the public not to use paper, and in convincing the various companies to use digital form instead of paper form.

I was chatting to a news paper owner the other day, asked him about the number of newspapers he prints, and how much did it drop.  He admitted that it dropped by 30-40% as the subscribers have dropped by that amount.  I said to him that subscribers will drop even more when my generation is dead.  People up to the age of 40, I think, prefer screen instead of print (I prefer screen instead of print, but I am technologised/digitalised and a non conformer), he was not happy to hear that and of course he wouldn’t.  I suggested to him that he may try to cut the subscription price by asking the people to recycle yesterday’s paper in order to collect the new one, that way he would recycle and reuse the old paper, which will keep him running for a bit longer, and at the same time he must intensifies the online presence to continues to receive advertisers.

Today I heard that a newspaper had discontinued, and soon many other will follow suit.  Even though the kindle died, and ebooks are being used on smart phones and IPad, that doesn’t mean that technology is not that great.  Many will prefer to read on their smart phones and if the weight problem while traveling persists, then buying books will not be a great option anymore.

Are you not glad that we will have more trees? more oxygen in our world? I do hope though that with the stop of paper printing we will also see that the domino effect of saving the world, greenery, animals, green house gases and so on will help us to live longer and have a better life.

Furthermore, writers and columnists please don’t disappear, your market is still important, you may just want to tweak your writing to make it suitable for screen and subsequently downloadable to people’s phone in case they want to share it as a PDF.

Making our life better is of utmost importance, and if for this to happen some people lose money, then why not.

Happiness, what does it mean?
Scroll to top