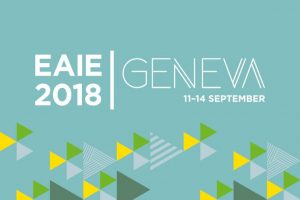 This is the 6th year that I attend the EAIE (the European Association for International educators) and I pride myself to be a member of this education advocacy organization that works on equality, imagination, peace, love, and most importantly quality. I am one of 3000 members and we all contribute to the advancement of education around the world. The first conference I attended was in istanbul, I went for the morning run and joined many sessions, learnt a lot and this year it’s the 30th anniversary of EAIE conference and I felt it was one of the best, not because it was convened in Geneva, which actually made it more interesting, but because the sessions were more varied and the crowd that attended were friendlier. I was sorry not to see many Arabs in the conference (maybe none) and maybe only one Arab university, but ninety countries were represented and it’s sad that we in the Arab world didn’t wake up to the fact that internationalization and quality assurance are so important if we want to be counted in the league of education. People at the conference were taking the subjects seriously, these were not even spoken about where I come from.Next year the conference will be held in Helsinki the capital of the country that captivated the world with it’s fascinating education, and everyone is talking about what they will do when they get there and if they are going to witness the progress and see first-hand the advancement. Even though the participants come from similarly advanced countries but they take education seriously, they want to reach a level or two higher than they are at now. When we, on the other hand,  think of education as a time passing affair and a place to make money.

I hope that in my life time I will see a school or a university in our part of the world that becomes ranked in its true sense, and I want to see people flocking to check out the methodology it has followed to reach this level. I want to make sure that my grandkids kids have a more fascinating life and they would look forward to the start of the school year, not dread it; I want to see that their teachers are not complaining about the long teaching hours and the number of assignments to mark. I want to see an Einstein and a Steve Jobs graduate from our schools and an education lawyer who spends his time preparing laws that advocate better teaching methodology.

I have a dream, and it will happen.