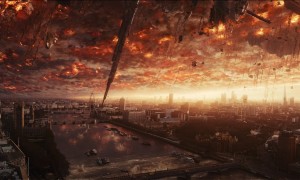 For those of you who still have to watch the movie please do not read this blog post.

I loved it, loved it, loved it. Its my type of movie, full of aliens and full of futuristic ideas that I am sure will happen and hopefully I will be alive to see them happen.  The actors have improved and the effects are amazing.  What I loved about it is the unison of the whole world, cultural differences seize to exist, no religion, no language and no discrimination of any sort, we unite against an enemy that has one thing in mind, to destroy humanity and all the species in the universe.  I loved the way they revived the main actors in the first Independence day movie, and woke them either from their coma or their illnesses, the linkage is quite severe and even though 20 years have passed since the first movie, whoever thought of it is a genius.

Few criticisms, firstly, why on earth do we have to show Burg Khalifa as one of the land  marks that were destroyed by the aliens, but we didn’t show a single Arab as having a role in destroying the aliens? I saw Africans, Chinese, Indians, Russians and all other human kind, not us? did the producer think that we are still in our tents and camels? rearing sheep and unaware of what is happening around us? or he thought to let those idiots bomb each other; as it is they have “aliens” who think that by killing some arabs along wth themselves they will go to heaven.  Seriously though, I am curious on how they missed 300 million people? this remind me of an old joke: apparently one of the American presidents was talking to the prime minister in a bar, a friend entered and saw them speaking, he asked what are they talking about? the president said that we are contemplating to kill 10000 Arabs and one blond! the friend said, why the blond? the president turned to the prime minister and said: I told you no one will care about the Arabs.

Second criticism, I am sick and tired of portraying women as the strong and the able, when in fact we do not need to have that emphasis, I think we have neglected the “men” for a long time and that made them either soft or killers, and that is not something that we want in our future fathers, brothers, sons and husbands. I feel that moderation is great, it is our role to raise well mannered and understanding men and women who care about the world, about humanity, those who are able to educate the future generation and “do good” .  The film industry is going down because of this empowerment given to women, so every great role these days is a women role; on the other hand men hold roles like Hercules, king Arthur, Omar Almukhtar instead of creating a great personality like the ones we see in feminist movies.  think of the Intern, what happened to Robert De Niro? he is the matcho actor that everyone loves, why is he playing Tai Chi and being as soft as a mush that cries about any thing. Thank God JKR wrote Harry Potter and not Harriet potter.

I feel some re-evaluation of the movie industry is bound to happen soon, as we all depend on it to learn what is happening in the world.