End of a lovely/serious/sad/ year 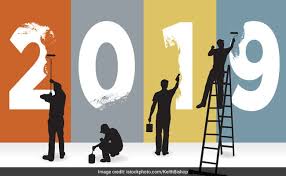 I woke up early one morning in the beginning of the year to a phone call.  I was being invited to go to Ireland to visit few universities, that was a big surprise as I did go to Ireland few times before but I had to book everything on my own.  Hence the thought that 2018 will be a great year. The surprises followed like thunder, I was invited to visit Belfast, NewCastle, Manchester, Switzerland, and many other places. There were also few conferences that I had gone to as a speaker, which was fantastic and unexpected. The countries that I had travelled to in the midst of my trips are a lot. I had gone to France, Switzerland, UK (many cities), Italy, Turkey, UAE and Syria, this last one was for a visit with my mother.

This year was so annoying as its a happy year and at times its very illusive and sometimes I want to just get rid of it as soon as I can. My best friend died due to Cancer and my husband had a severe car accident, he is ok now, which is a blessing, but losing a best friend is not something to sneeze at, its a life time of friendship cut short due to bad doctorship (is this a word? not sure but I can use it I guess). I also stopped working for three months and became a full time nurse for my husband, he is better now which means I will be back at work after the new year.

I also lost my whole team in Dubai office and replaced them all with a totally new one, I am hoping this will bring better fortune to us.

On the bright side, I joined a reading group, and managed to read 43 books, reviewed them and also reviewed the 2018 Arab bookers award ( I must add here that the book us the readers voted for didn’t actually win)

I tried in 2018 to look at my inner self, so I went for an art class, meditation classes, poetry classes and many other courses that I thought will benefit me.  I joined a movie club at last and became friend with the owner of the movie club.

The major thing though was to think of joining the Parliament in bahrain, and joined the politics course that the government runs for those that want to run.  However the preparation was cut short when my husband’s accident happened! I had to travel to see how he is and ended up staying for a month which was during the shebang of the voting.  I surprised myself with the media messages, I never knew that I could actually be a politician.

I am having lots of hopes for 2019, I have a good feeling about it, lots is happening that will push people to do more work. For example Expo 2020 will bring fortune to the area, over 5000 exhibitors are coming to Dubai, and that by itself is a dramatic event which will let money flow everywhere. The preparation will start in 2019 and we are all feeling the vibes.  One thing I don’t like is the start of VAT (even though its necessary for the countries that do not have oil as a main source of national GDP anymore) but I feel that too is going to give a great push to the economy, people would work extra 5% just to cover it.

What do I want? ok, I would like the business to run as smoothly as possible, I want to have happiness, I want to clear whatever pending items in my life. I would like to finish  my book and publish it, and would love to finish my ten children stories and publish them too. I want to travel to countries that I haven’t seen yet, and want to see my children continue to stand on their own feet and flourish. I would love to be next to my mother for a long time to come and enjoy her company.

On a final note, a certain song is sort of stuck to my mind for few days:

So my final note is: I want everyone including myself to be a billionaire.