The man who invented Christmas 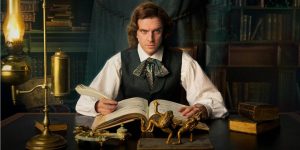 Charles Dickens was known for his imagination of his characters as if they are with him in the room, he imagines their looks, their clothing and their attitudes; he also extracts his characters from wherever he goes, it can be a name that attracts his attention, or a certain look or the way a person walks and so on. None of his books are scary but most are sad and set in the same era he had lived in. he was also known as a protector of the poor and the underdog.

This movie was about the writers block that he suffered from, his lavish living didn’t deteriorate he moved to a new house and continued to behave as if he still has money. He wanted to write about Christmas, so His publisher refused to pay him if he was going to write about Christmas, he decided to borrow. Then he overheard his children’s nanny tell a story that she frequently heard her parents tell it during Christmas, so he embarked on writing his Christmas Carol book.

Charles also had a muse (Mr Scrooge), who either pulls him up or puts him down; the movie shows that Charles also has nightmares as he suffered a lot in his childhood (not sure of this myself) near the end of the movie Charles wanted to shut his muse up by putting him in a grave. No one wants to die of course even if it is a figment of ones imagination; so the cry of help and the promise that he will be a better muse was a very sad scene.

The book was eventually completed and apparently it was  sold out by Christmas Eve.

I had read David Copperfield, great expectations, tale of two cities, but I didn’t read Christmas Carol (maybe I should now) and I noticed that Charles Dickens is always defending the poor and the needy, so the movie depicts this very well like asking Tara the Nanny to give her opinion about the chapters and so on. This link can be helpful as it’s an interview by a person who specializes in Charles Dickens (https://fivebooks.com/best-books/charles-dickens/)