Paranoia or something else? 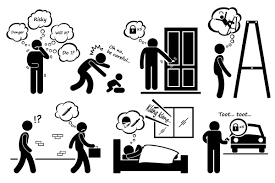 This story is about a man.  A person who had a head injury, and something went loose in his brain. No one realised this and until now, no one would tell him that maybe a loose fuse is disconnected in his brain.

It all started by him smelling something like fire in the house, he will wake up from his sleep and goes around the house trying to see where the smell is coming from. That feeling had developed to other habits, eg checking on his children, he would feel that they are chocking or, maybe dyeing, or suffocating. And that too was futile as all of them are happily asleep.  Soon, the housemaids had to endure, as he feels that they are hiding a man in their rooms, his wife would hear shouts and bad words, he would jump in their room, search the cupboards, the bathrooms and under the bed.  All the housemaids would lock their doors and never open it, until his wife would wake up and drag him to bed.

In all these times nothing happened to the wife, or in exact words there was no doubt that she is dying or anything of this sort. Suddenly, she was enduring, he would follow her to work , he would search her cloths, he will check the bank statements to see if she had spent any money and on what, if there is a coffee drank, then he would calculate how many cups that entry was for, if it was two cups, then there must be a male counterpart. Then the woman wanted to bring a driver, the shouts reached heavens, what do you want him to do to you? Do you want him to sleep with you? We don’t want drivers in the house, we have kids, and we have housemaids, and he can do something to them, and and and.  She was devastated, but he is the husband, and he needs help.

Then they moved to a new house, they lived in a flat on the last floor which had a roof. The woman became a bit paranoid by now, and she is scared of locks. So the doors are not to be locked, and that included the roof door, in case a fire happens and they had to evacuate! Then a new problem happened. Someone will come up and sleep with the maid, he thought, he would go up a hundred times a night just to ensure the locks are tightly done, and no man with the housemaid.

In all these years, he wouldn’t sleep at night, he would only sleep during the day, to make sure his paranoia is fed during the night.  This actually made the wife happy as she can sleep knowing that he is awake, and nothing can happen to her.

During all these episodes he would pack his suitcase and leave, as he feels that no one believes him, as all his family just ignore his persistence in doubting others, which made him more furious. His departure will give a breath of fresh air to his family.

Paranoia is sad, and its sadder when the person feels that he or she are right and everyone else is the mad person.  The problem is no one can break the news and tell the other to seek help? The paranoid person is always right, isn’t he?