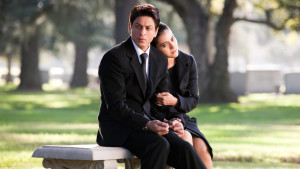 Every time the Movie “My Name is Khan” is shown on TV, I watch it with intent as if I am watching it for the first time, and everytime I get a different feeling about it; first how the actor sustained the autistic behaviours and gestures in a three hour movie, then how the mixed marriages can suffer, then how a person can make a difference despite his difficulties, then how the society can be so unjust to some people; sometimes though I think that it doesn’t matter what gender, religion, colour, ethnicity, language one has, its one thing that differentiate us and animals, its our humanity.

This movie embodies all the problems of the world, all the hate, discrimination, the unjust feelings that everybody had because some people took it upon themselves to find fault in others and decided to make them extinct, this group of people are not necessarily referred to as the extreme Muslims, as all religions have some extreme groups in them, one cannot deny that, its the group that were born and been taught in a wrong way; a way that directs them to killing in a any shape and form.  If you open the newspapers, or watch TV these days you can hardly see a page without some sort of blood in it, or a screen without fire or killings.  Movies are also portraying this extreme behaviours in some way or another, the children games are teaching the kids that to survive you need to kill whoever in front of you.  I saw a video the other day of a child mimicking the way ISIS are slaughtering people and cutting their heads, but this child with a knife was cutting the head of his own teddy bear, vicious and sad, but we cannot do anything about it.

I think if all of us decided that enough is enough and stood against this terror we will all win!

Can you imagine a world without terror? we will be the best nation, no one can compare humanity to animals, as we are the only ones who can create; we can discover, we can invent, we can drew, we can build, we can love, we can work, we can direct, we can motivate, we can coach and we can teach. the last one is the most important trait that we can all have, but we must teach the good stuff, we must remove the brutality and the viciousness of the mind, we must treat the disease that some people has that is called “discrimination”, we must care and we must share.

Life is beautiful and worth living, I feel its high time that we start a movement similar to what that autistic man called “Khan” (spelled from the gutteral cord) had done.

Follow Me!
New Book by Dr Hamed Abdul Samad – The fall of Islamic world Events that changed my life
Scroll to top